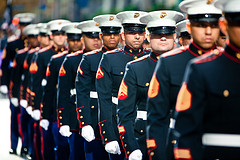 Semper Fidelis: Are you as faithful to your Lord, as these men are to theirs?

Intellectual Humility: Having a consciousness of the limits of one’s knowledge, including a sensitivity to circumstances in which one’s native egocentrism is likely to function self-deceptively; sensitivity to bias, prejudice and limitations of one’s viewpoint. Intellectual humility depends on recognizing that one should not claim more than one actually knows. It does not imply spinelessness or submissiveness. It implies the lack of intellectual pretentiousness, boastfulness, or conceit, combined with insight into the logical foundations, or lack of such foundations, of one’s beliefs.

It is my prayer that this attitude be clear in all that I write or speak, and I invite you to please call me down as soon as any other attitude is seen rising up in me. At the same time, I invite you to allow yourself exposure to some of the difficult ideas I offer here, and pray for our Lord to show His truth to you–to help you to accept, or if need be, to refute what I share.

There remains however, our problem with the popular understanding of “faith.” The meanings of words are not pins stuck in a map. They are more like nations whose borders expand and shrink with time and are occasionally prone to migration, bifurcation, or even extinction.

This link shows an animated map of Europe over the past thousand years and makes a good analogy for the way the semantic domains of words can change over time. A problem arises when this “semantic drift” affects our understanding of God’s word. This happens because we attach special significance to words in the Bible, and then fail to change our Bibles when the meaning of those words change, because of the culture we are embedded in.This is not as serious as the problems which arise from transliterating and not translating words, such as has happened with “Christ, church, or gentile.” But can work with these problems to further obscure the simple meaning of the Bible.

The English noun “faith,” and its companion verb “believe,” seem to be undergoing such a transition in our day. Ask yourself, what does biblical faith mean?

I have found that most people answer this question along the lines of “believing, no matter what; a strong belief, or belief without evidence.” Does this line up with your experience?

In the same way “believe, is often seen as being contrary to experience, as in “I know it looks bad but we just have to believe.”

Faith according to the dictionary

In fact this is one of the meanings for faith/believe found in most dictionaries. The Free Dictionary lists six definitions for faith. The second is quite close to what most people seem to think:

“2. Belief that does not rest on logical proof or material evidence. See Synonyms at belief, trust.”

Unfortunately, while commonly understood, this definition is a far cry from the meaning of the New Testament noun pistis (πίστις) which is usually translated as faith/belief; and pisteuo, (πιστεύω) the verb rendered believe/have faith. (For good measure we should also include the Greek adjective pistos (πιστός) normally translated as faithful or trustworthy.) These three Greek words have the same essential meaning and are only differentiated by their grammatical use.

It is interesting to me that the first definition of faith given by the Free Dictionary is quite close to the biblical understanding, but quite different from the popular understanding. It is:

“1. Confident belief in the truth, value, or trustworthiness of a person, idea, or thing.”

It turns out that the Greek words pistis, pisteuo, and pistos, are all based on a third Greek word; peitho (πείθω), a verb meaning “to persuade, or be convinced of what is trustworthy.”

The fact that the primary dictionary definition, the popular understanding, and the biblical meaning are no longer in agreement leads me to believe that the meaning of this word is in transition. I suggest that it is time to consider revising our speech and Bible translations to better reflect the biblical intent, rather than risk misleading our audience (or deluding ourselves).

Certainly our enemy would prefer to have people believe that Christianity is based on a belief without evidence and not a conviction based on evidence over time, that the word of God is trustworthy.

The distinction between the contemporary understanding and the biblical intent is seen quite clearly in the well know verse, John 14:1:

“Do not let your heart be troubled; believe in God, believe also in me.”

In the popular understanding of “belief” this verse seems backwards. Why would Jesus have based believing on Himself whom His audience could see, on a God who they could not see? Shouldn’t it have been the other way around? Does it make sense to understand this verse as saying “You believe in God without evidence, therefore accept me without examining my claims?”

Of course not. Jesus is saying “You have placed your confidence in God because He has repeatedly proven Himself to Israel. Likewise I have demonstrated to you over and over again that I am the christos—the king God ordained to deliver you—now rely on me in the same way.”

It is this meaning that we see in the Hebrews 11:1: Now faith is the assurance of things hoped for, the conviction of things not seen. Faith here should not be understood as acceptance without proof, but as confidence based on the evidence of God’s past dealing with his people. A history which the author proceeds to delineate. It is this that engenders the loyalty which the rest of the chapter demonstrates. It is also this type of confidence which the demons hold without leading to loyalty. Which leads us to our next point.

Just as the English faith/believe has many nuances and covers a vast semantic territory; so the Greek pistis/pisteuo/pistos encompasses a range of meanings. The third meaning of faith given by the dictionary is:

“3. Loyalty to a person or thing; allegiance.”

When we look up loyalty on the same site we find this amazing entry:

What I find amazing about this is the fact that this worldly site quotes a scripture that few Christians take literally in today’s society. When we look at the synonyms given above we find that few Christians in western society are willing to apply them exclusively or literally to their supposed King Jesus.

These are not usually seen as terms that relate to the Christian “faith” but rather to a “citizens” duty.

This is hard for us. It is something new and uncomfortable. Is this really what Jesus demands of His followers—of His subjects!

This it turns out, gets to the heart of the meaning of the New Testament terms. Returning to the great “Faith Chapter” of the Bible—Hebrews 11, we find that if we replace “by faith” with “due to loyalty” we keep the intent of the Greek, and get something that makes even more sense in modern English. Be sure to read it on your own, but for now consider this excerpt:

Due to loyalty Moses, when he was grown up, refused to be called the son of Pharaoh’s daughter, choosing rather to be mistreated with the people of God than to enjoy the fleeting pleasures of sin. He considered the reproach of his king greater wealth than the treasures of Egypt, for he was looking to the reward.–Hebrews 11:23-26

Notice that it was the “faith/loyalty” of Moses and his fellow hall of fame-rs that determined their choices and resulted in the enmity of this world’s systems. Notice the difference in tone and significance between the phrase “faith in Christ Jesus,” and “loyalty to King Jesus.” Which one caries more cognitive content. Which one seems more in line with the New Testament message. Which one holds an explanation for the treatment the early church received at the hands of the Roman Empire.

Does God have faith in us?

There is at least one more aspect to all this that we have yet to cover. We often think of faith as something we direct toward God. This fits with the conventional view and seems at first to jive with Hebrews 1:1. He is invisible so we accept His reality without proof. The lie in this is seen when we realize that God directs His “faith” towards us! This is the clear statement of 2 Tim. 2:13. Are we to presume that God has no evidence of our existence? That is ridiculous—God knows all about us. The issue from our side and His, is not “belief” it is loyalty!

Here again, notice how the small corrections I have introduced into the text result in a dramatic change in tenor. I want to emphasize that I am not changing the meaning of the Greek text behind these English words, but reasserting the original meaning of the authors which modern translations obscure. (I again humbly point you to the book, The Problem with Christ, Why we don’t understand Jesus, His enemies, or the early Church.)

I continue to invite Greek scholars to critique my transitions, but in their absence I suggest you pray for the Holy Spirit’s guidance. He is after all loyal to you and has promised to guide you into His truth—His word. Ask Him if this quote is a true representation of His heart, or a deception…

You then, my child, be strengthened by the grace that is in King Jesus, and what you have heard from me in the presence of many witnesses entrust to loyal men who will be able to teach others also. Share in suffering as a good soldier of King Jesus. No soldier gets entangled in civilian pursuits, since his aim is to please the one who enlisted him. An athlete is not crowned unless he competes according to the rules. It is the hard-working farmer who ought to have the first share of the crops. Think over what I say, for the Lord will give you understanding in everything.

Remember Jesus the king, risen from the dead, the offspring of David, as preached in my good news, for which I am suffering, bound with chains as a criminal. But the word of God is not bound! Therefore I endure everything for the sake of the elect, that they also may obtain the deliverance that is in King Jesus with eternal glory. The saying is trustworthy, for:

for he cannot deny himself.

I know that we have covered some difficult ground here. Yet I am confident (have faith) that He will confirm His word in your heart. If these things resonate in your spirit please share this post with others, like, and plus one it. Ask questions, or leave comments. Also don’t forget to sign up for updates.

As always I remain your servant in Him whom we serve,

6 thoughts on “What is Biblical Faith?”