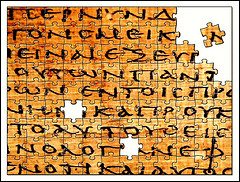 Translating ekklesia can be a puzzle.

It turns out translating ekklesia is not as easy as it seems. In part 1 of our series we saw that the English meaning of “church” has to do with a building, even though most followers of Jesus recognize this is not what it means in the Bible. We also saw that 1st century Greeks used the word in a political context.

In part 2 we examined how ekklesia was used in the Greek Old Testament or Septuagint, quoted by Jesus and the New Testament authors. We saw that Jewish readers understood ekklesia not as an assembly of Israel upon some particular occasion, but the people of Israel as God’s people distinct from everybody else.

Since the English word “church” does not normally convey either of these ideas, our task here in part 3, is translating ekklesia into an English form that conveys the 1st century understanding.

Hoskyns and Davey (see part 2) hold that “church” is a perfectly good word due to its lack of cognates in English. They believe we only need educate people on its New Testament usage. I am not comfortable with this for at least two reasons; first, it is most commonly associated with a building; secondly it leaves those who do not understand Greek completely dependent on their teachers and not the Bible itself. Most importantly it is devoid of the political/national significance that Hoskyns and Davey so clearly point out.

So what are we to use instead? “Citizens” certainly comes close, but being plural cannot fill in grammatically for the singular ekklesia. “Citizenry” comes closer, but sounds somewhat archaic. “Electorate” has a nice ring to it, and I especially like its linkage to the fact that we are the elect of God. Finally there is the fact that we have not mentioned before: In at least one New Testament reference, ekklesia clearly refers to a group of people antagonistic to our king’s people. This tells me that the classical Greek idea of “assembly” was still present, at least vestigially, in the minds of the New Testament authors.

My suggestion for translating ekklesia…

As a result of these considerations I tentatively submit that “assembly of citizens” be used in place of the English word “church.” It has the advantage of being a singular entity that retains the Ambassadors’ sense of a group, and at the same time emphasizes the group’s political/national nature. The only thing that is not entirely pleasing is the lack of economy in replacing one Greek word with three in English.

To test our hypothesis let’s try it out on a few passages to see if we get any value added over using “church.” First let us look at an extended passage where the use of ekklesia is singular and not clearly referring to any individual local assembly. In this passage I am simply cutting and pasting “assembly of citizens” for each occurrence of ekklesia, and “king” for each occurrence of christos. (For a full understanding of my translation of christos please see the book, The Problem with Christ.)

One further note is that verse 21 is integral to understand this passage even though it is often not included. For this reason the NASB, and other translations often find it necessary to add an italicized “be subject” following “wives” in verse 22. The italics indicate that these words are not found here in the Greek text. I have removed this in the rendering below to show the ambassador’s actual wording:

Next we provide the same treatment to a passage clearly referring to multiple local assemblies. This is my translation:

Paul, an ambassador (not sent from men nor through the agency of man, but through King Jesus and God the Father, who raised Him from the dead), and all the brethren who are with me, To the assemblies of citizens from Galatia.–Galatians 1:1-2

It seems that we have indeed accomplished our goal of finding an English equivalent for translating ekklesia that conveys the intention of the authors of the New Testament. In fact, we may have gotten even more than we bargained for. It is uncommon to find words that have a one to one correspondence when translating from one language to another. In the case of ekklesia it is usually translated as “church” but in three cases this is impossible. In Acts 19:32,39,41 it is almost always rendered as “assembly.” Here we find that “the whole city was in an uproar” (Acts 19:29) due to Paul’s proclamation of the good news of King Jesus at Ephesus. Look what happens when we modify these three verses with our new understanding:

Our rendition actually gives a fuller understanding of the event. It now becomes clear that Paul’s opponents were trying to take spontaneous political action against him. It was not simply a mob, but they were clearly following the Greek city-state model and gathered at the standard meeting place, where the dually appointed city clerk executed his office and told them they needed to reconvene a “lawful” ekklesia. It would seem that our hypothesis holds even better than we had hoped.

Next week I hope to conclude our series on “What is Church?” by looking at its opposite. Until then why don’t you try to come up with a simple word or words that conveys the opposite concept of ekklesia. You get extra credit for finding the word the New Testament authors used. 🙂

Win a free copy of The Problem with Christ

In order to make things a little more interesting, and encourage more involvement in the comment section below, I am offering a free copy of The Problem with Christ. To win you must comment below and share what you think the word is that New Testament authors used for the opposite of ekklesia. If the winner is in the U.S. or Canada, I will send a hard copy. Due to postage, others will receive a copy of the PDF (unless they want to pay postage). The winner will be the first person to submit the correct answer.

If this blog encourages you in your walk with our king, please help spread the word by sharing, liking, plusing, or just telling folks about it. And please keep us in your prayers.You may email me at:photo credit: Olga Díez (Caliope) via photopin cc

23 thoughts on “Translating Ekklesia: What is Church–Part 3”