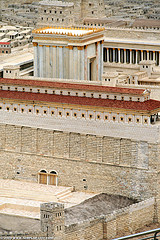 This is NOT the Old Testament Church!

(As an aside I should point out that this is the first week I am using a new plugin which divides the post into pages or allows viewing as a single page. You can choose “next,” or “single page,” at the bottom of this page. Please let me know if it causes any problems.)

Last week we began our series on what is Church by looking at the English dictionary, and the Greek word ekklesia which the New Testament authors used, and is almost always translated as church.

We saw that the English word has little relation to the meaning of the word used in the New Testament. In fact “church” in English is derived from the transliteration of two Greek words meaning “a lord’s building!”

It is well known that most of the Old Testament was written in Hebrew. It seems less well known that King Jesus and His ambassadors usually quoted from the Greek translation of those scriptures known as the Septuagint. (I am planning a separate post on this subject for the future.) Since the Old Testament informed the New Testament authors understanding of the words they used, it is important to look at how the Septuagint treats the Hebrew text. In this case we find that ekklesia is one of two words used to translate the Hebrew word “qahal”(קהל) which has as its core meaning the idea of a gathering of people.

At this point, in the interest of full disclose, I need to point out that I am not pretending to understand Hebrew. I consider myself fairly competent in New Testament Greek, but must depend on others when it comes to Hebrew.

Back in 1931 an Anglican Priest by the name of Edwyn Hoskyns, along with Francis Davey wrote a fascinating little book called “The Riddle of the New Testament.” In it they give a wonderfully comprehensive word study of ekklesia; It is unfortunately out of print now, but I was able to find a paperback edition from 1963 which is quoted here. After citing much the same information that we have already covered, they cite a number of passages in which they demonstrate that the Greek denotation of ekklesia is clearly not sufficient to explain its usage in the New Testament. They then go on to detail the use of ekklesia in the Septuagint. Given the thoroughness of their analysis, and its applicability to our subject, it seems an extended quote is in order:

My appeal to an expert:

Now, although classical and contemporary usage provides no analogy, there is one collection of Greek writings that abounds in references to an ekklesia of God, or of the Lord. This is the Septuagint, the earliest Greek translation of the Hebrew Scriptures. This book was the Bible of the Jews scattered throughout the Roman Empire. It was credited with a miraculous origin, and venerated as possessing divine inspiration…. The marked preference, in quotation, on the part of New Testament writers, for the readings of the Greek version, makes it certain that most of them were familiar with it.

A careful analysis of the books of the New Testament shows, not only that the authors tended to quote the Jewish scriptures from the Greek and to make use of Old Testament phrases in order to evoke their Jewish theological associations, but also that the writers were so completely impregnated by the Old Testament scriptures that they fell unconsciously into a scriptural turn of language. The Greek translation of the Hebrew Scriptures was of prime importance to the New Testament writers precisely because they, like the men who produced the Septuagint, were faced with the problem of giving expression in Greek to ideas that had first taken form in a Semitic idiom. It is therefore natural to inquire whether Septuagint usage may, in part at least, account for the expression, ‘the ekklesia of God.’

Two Hebrew words, which may be transliterated edhah and qahal, were used in the Old Testament to describe popular gatherings…. But, after the Exile, qahal came to be used almost to the exclusion of edhah, and combined in itself the two shades of meaning that had formerly kept the words distinct. Meanwhile, Israel was becoming more and more conscious of being a peculiar nation, a chosen race, the elect people of God. And so ‘the qahal of Jehovah’ was used to signify, not an assembly of Israel upon some particular occasion, but the people of Israel as God’s people distinct from everybody else, whether assembled or unassembled, the chosen of Jehovah for his service.

The earliest translators… rendered both edhah and qahal by the Greek word synagoge, emphasizing the notion of ‘assembling’ by a word that, etymologically, meant ‘lead together’. But later synagoge was generally reserved for edhah, and ekklesia for qahal. Probably this choice also was guided by etymology: qahal was formed from a verb meaning ‘call’ or ‘summon’ in precisely the same way as ‘ekklesia’. It is possible even that an identity of consonants enabled bilingual Jews to recognize the Hebrew qahal behind the Greek ekklesia. But, whatever the exact intention of the translators may have been, they caused ‘ekklesia of the Lord’ to become a common scriptural phrase with exactly the same allusion to Israel’s vocation as the ‘qahal of Jehovah.’ (Jehovah is rendered ‘the Lord’ in the Septuagint.)

Since Christians from a very early date regarded themselves as the ‘Israel of God’, the true elect race (e.g. Galatians 6:16; 1 Peter 2:9) and ‘holy nation’, as opposed to the Jews who had rejected the Messiah, it might seem that, for that reason alone, ekklesia came to be their designation of themselves. By use of it they certainly claimed the Old Testament phrase, with the allusions of particularity and service just noted, as rightly descriptive of their function in the world. And no doubt this claim partly accounts for their choice of the phrase.

We can summarize what we have learned from the Encyclopedia Britannica and from Hoskyns and Davey under three main points;

Based on this understanding we can see that the word ekklesia when applied to the followers of King Jesus is a clear reference to the nation over which He presides, as opposed to those which have not recognized His authority.

In my next post we will see if we can come up with a more accurate and meaningful English translation for the Greek ekklesia. What do you think? Can we improve on the word “church?”

You may email me at:
photo credit: Templar1307 via photopin

1 thought on “The Old Testament Church: What is Church–Part 2”